Offspring is a UK based retailer with locations in London, Manchester, Birmingham, Brighton and Dublin. But all of their raffle operations are run through their instagram account, it has been a controversial raffle method and we shall discuss below.

Offspring’s raffles are held exclusively through Instagram under the #offspringhqcommunity, which on the surface seems like every other Instagram raffle. You post your size and a keyword hidden in the post (to prevent bots) you then wait for the raffle to close and hope you get a DM tell you that you have won!

But what OffSpring do differently is individually vet each potential winner to see if they are a ‘true’ sneaker head and not a reseller, your Instagram profile must be public and a typical winner of OS raffles; posts frequent on-foot shots, shows their collection and interacts with them frequently on social media.

The raffles are open for a very short duration sometimes 60 seconds with the very hyped pairs so you need to have post notifications on, be constantly checking or be part of a discord group with an instagram monitor to alert you the second they post to stand any hopes of getting In quick!

This has sparked a lot of discussion within the community with one camp loving the approach to try and get pairs in the hands of people who will actually wear them, while the other side of the argument is that it’s turned into a chore having to constantly be on edge for a raffle, teasing followers with raffles and having to interact frequently.

The odds are actually exceptionally good on OffSpring raffles because they only have raffles open for a couple of minutes and are collection only so realistically only people around London can enter frequently with the exception of a few people willing to make the trip who live further away.

Typically they get a few thousand comments in that time frame and when you take into account the spread of sizes this is most likely the raffle with the best odds of winning.

The hard parts are if you don’t post sneaker content but are still a huge sneaker head and if you don’t spend a lot of time on social media to catch these raffles. But the argument stands this raffle is for those who want to put the effort in to get the shoes they really want.

As stated above OffSpring is very publicly against re-selling and the use of bots. They want to get pairs into the hands of real collectors, not people who will sell them.

They frequently check Ebay, Bump and Depop to look for people selling shoes supplied by them (identified by an additional barcode sticker put on the exterior of the box) and ban these people from entering any future raffles. 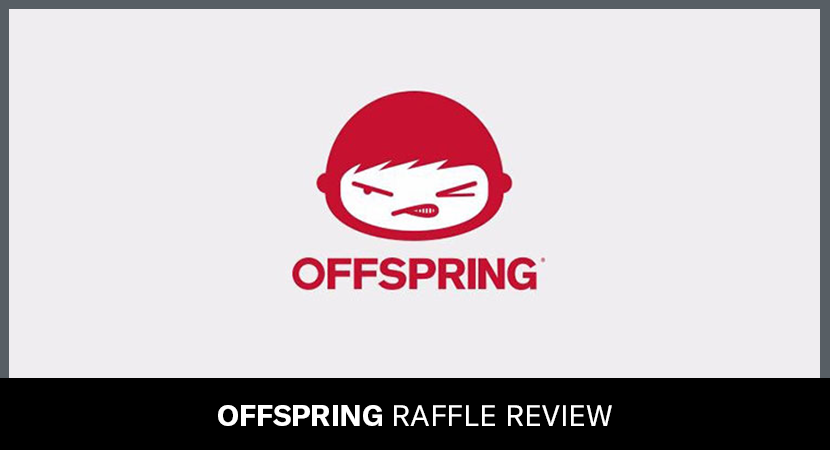 Various fan accounts have also popped up that try to catch people selling shoes from OS or maliciously try to make it look like they have caught someone selling shoes to get them banned by OS which has kind of tainted the whole system with people trying to abuse It. I think OffSpring need to choose a side and either accept ‘evidence’ from others or don’t at all and only ban those they personally find over their current sometimes they do sometimes they don’t approach.

In terms of the actual ability to bot, it used to be relatively simple as it was just posting your size as quickly as possible so a few bots were available but now OS have started requiring you to post a keyword hidden in the post along side your size.

Overall OffSpring offer one of the best raffles solutions for collectors with exceptionally good odds on winning and a vocal goal to get more pairs to collectors. Its very quick and easy to enter without the need to post your location, D.O.B or even your name (this is required after you win). We also appreciate they don’t make you tag friends in the post like most IG raffles.

One big negative that is frequently brought up is that they won’t ship any pairs, its been said that this is due to contracts with Adidas and Nike that they have to do collection only but in part this contributes to the better odds due to a smaller pool being eligible to enter. Additionally the need to interact frequently and having to pay very close attention to any post incase it’s a raffle could be a little too much for some people along with the sometimes toxic fanbase that has now built up around OffSpring but these are typically in the minority.

Enjoy reading this? Check out our other raffle reviews, or upcoming sneaker releases.